​“I’m not in charge of the outcome, but I am going to do everything I can to run your race beside you,” she said as we discussed the significance of building long-lasting, genuine relationships with her patients. Susan Crafton has been an oncology nurse at The Christ Hospital in Cincinnati, Ohio since 1983. As she is approaching the end of her career in oncology, we sat down with her to chat a little bit about why she chose this profession that is still very much a part of who she is 37 years later.

Growing up on a farm in Piqua, Ohio, Susan had always envisioned leaving her small town and heading to a big city for a “glamorous career,” but circumstance and a bit of faith drove her somewhere else. “It was not glamorous, but it was my vocation,” she says. ​​ In a profession where oftentimes it’s much easier to disconnect your feelings and stick to medicine, Susan did both. She is a firm believer in cultivating meaningful relationships and connecting with her patients on a deeper level, while providing the best care possible. She describes the outcome to be well worth the risk. ​

Although Susan would never say this herself, she is a fan favorite among her patients and for good reasons. The truth in that statement lies in the words of her former patient and friend, Ashley Gill. Ashley will always be remembered as a vibrant wife, friend, mother of two twin girls and so much more. Although Ashley, a KWF recipient, passed from cancer last August after LIVING a full life, her words continue to resonate and are a testament to Susan’s character: “Susan is the imperative buffer between the doctor and patient. She always has the layman’s term explanation to the ridiculous amount of jargon that your doctor rattled off and expected you to understand. She’s the one that makes things less scary, and always with her own little flare. For the sake of keeping these comments PG we will just call it 'flare.' Susan is that nurse that prays for you when you are in a tight spot physically and/or mentally, then reassures you everything is going to be okay with her signature, 'There’s my girl.' Even though she has many, 'girls' she has a way of making me feel like I’m the only one. I honestly believe that despite my doctor’s life expectancy expectations, I am still here today because of Susan Crafton. She’s that ride or die (pun totally included) girl you need fighting for your life.”

Just as Ashley speaks to her character, Susan is quick to commend her fellow nurses and colleagues working at The Christ Hospital during today’s pandemic. She gives credit where credit is due, even if that means downplaying any and all accomplishments to speak to the bravery of those risking their lives working on the front lines. Susan is grateful that she has the opportunity to work alongside such incredible medical professionals who quickly turned into lifelong friends. As Susan looks back on this journey of a career, she would probably tell you she couldn’t have done it without strength, humor, resilience, a whole lot of faith and a bit of irreverence. Although she may be hanging up the scrubs soon (or so she thinks), being an oncology nurse will always be who she is. As we were ending our conversation she said, “to be honest, it saved me as much as I saved anybody.” A testament to the power that lies in connection.

Susan Crafton is the first recipient of our KWF “LIVING through GIVING” nurse award. Given to a nurse who embodies KWF’s core values , goes above and beyond, and works behind the scenes to better the lives of their patients. Thanks Susan. 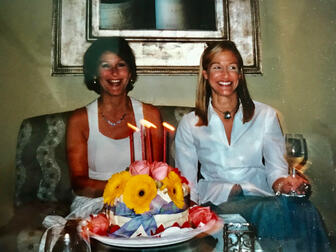 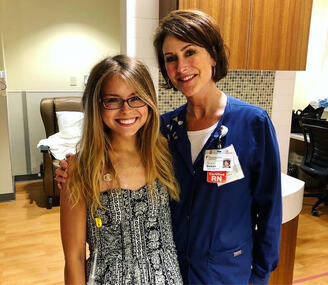