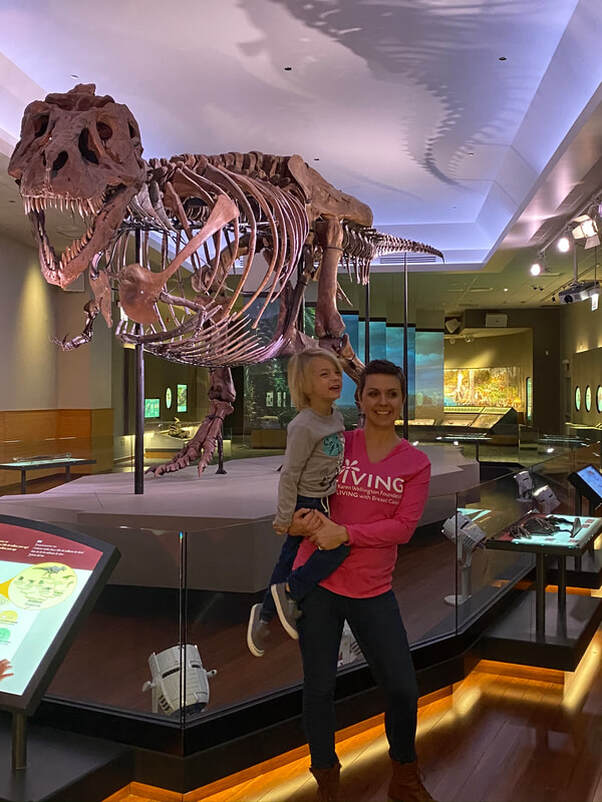 Chelsea’s nomination popped into our KWF inbox in early December. From the moment we scanned the nomination, we were hooked. We knew we would do whatever it took to put some Fun on her calendar! She was nominated by multiple friends and colleagues from the ​Graydon law firm. As we dug into her story, checking out her Caringbridge page, her hilarious, candid, and heart-tugging journal entries made us love her even more. ​Chelsea’s story with breast cancer began when she found a lump in her breast. Her 21 month- old infant was still trying to wean and, like most moms would, she chalked it up to a clogged milk duct. Her doctor agreed that it was likely “nothing,” but scheduled a mammogram, just in case.

She remembers feeling silly as she sat in the waiting room among many other women thinking to herself that she was just wasting resources that other people needed more than she did. She was in the middle of earning her doctorate and she could think of plenty of other places she would rather be than there. It wasn’t until after her doctor ordered biopsies and the nurse began ‘preparing’ her for what could happen that Chelsea got scared. By the time she left, all the other women from the waiting room were gone and she was in tears. Days later, she received the dreaded call. She was home alone when she found out she had Invasive Ductal Carcinoma. Chelsea remembers screaming into a pillow and then trying to get a hold of her husband and other family members. She talked to a close confidant in the medical field who assured her that this was “totally treatable.” Chelsea decided to treat cancer like everything else in her life. One step at a time. She even bumped up her doctorate and finished all of her work in just ONE week. Work that was would have typically taken over a month. ​“Chemo wasn’t what I wanted to do … it was just one more thing on my schedule that I had to do. I was counting down those chemo appointments on the calendar week by week.” Just as she was completing chemo, surgeries and radiation, she was feeling like herself again. She used exercise as a form of therapy. But not for long. One day she started having persistent headaches. Several MRI’s and tests later, Chelsea was diagnosed with leptomeningeal carcinomatosis - it had metastasized to her brain, specifically her spinal fluid.
‍

Chelsea was told that she had months left to live. In the hospital her friends and loved ones rallied around her. They cried and laughed together. This was the point when Chelsea’s nomination landed on our desk. Right after this life changing news. I was new to KWF, just learning the ropes and wanted to do everything I could to help her. Chelsea’s strong, confident, yet peaceful tone was a bit of a comfort to me as we got excited about her vacation. This trip was just what the doctor ordered. In fact, he told her, “do it, and do it now.” It was also a dream vacation for Chelsea’s son, Keaton. Everyone in their family had been to Chicago... even his little sister, Mara, had been before him! Keaton was absolutely sold on the trip after he found out that he could see SUE the T.Rex at the Chicago Field Museum. Chelsea told herself, “I’m taking that kid to see the dinosaur. I’m not dying until we see that damn dinosaur.” ​

So early one January morning, Chelsea and her family hopped on a private jet and bypassed the chaos of a bustling airport. While in Chicago, they went to Shedd Aquarium, Navy Pier and enjoyed an unseasonably warm winter weekend! Little Mara got new pajamas for her baby doll from the American Girl Store (which Chelsea notes are more expensive than any pair of pajamas she has ever personally owned). They also received a private tour of the dinosaur exhibit at the Field Museum, and Keaton finally got to meet Sue the T-Rex! Keaton finally got to see the damn dinosaur. Chelsea says, “I'm thankful for the days I do have… especially the good days. You just never know when you’re going to go. No one does.” Every time I talk to Chelsea, she teaches me what’s important. Like having a sense of humor. “Humor is my coping mechanism. I have a very morbid sense of humor. I’m always joking about setting up my husband with his ‘new wife’” she says, laughing. Her tone changes when she talks about her kids. “Right now I’m trying to make videos for my kids for the future. I’m scared they won’t remember me. It’s definitely painful and really really hard.” Chelsea’s irreverent joy, and level headedness are truly incredible. I later gushed to Chelsea that I’ve been fan-girling over her tattoos (which I noticed the day I met her). She has been adding a new tattoo for every month she continues to LIVE with Breast Cancer. And as for her next tattoo - she’s plans to get one of Sue the T-Rex. Chelsea and Keaton are both very excited.

Thank you to our GIVERS for this special trip: Michelle and Kevin Jones - KWF Board Member/supporters; Rick Pawlak - Ultimate Air Shuttle donors; Amanda Penick - Nominator, Graydon; and those of you who made a financial gift to KWF so they could see the damn dinosaur. - Grace Smith, KWF Program Manager

Update: Since publishing this story, Chelsea Rust passed away on October 14, 2020. Chelsea leaves behind her loving husband David and their two children Keaton and Mara. Chelsea, thank you for inspiring us to take the trip. We look forward to carrying on your beautiful and adventurous legacy. Cheers to you. You will be greatly missed.