The Light After the Storm 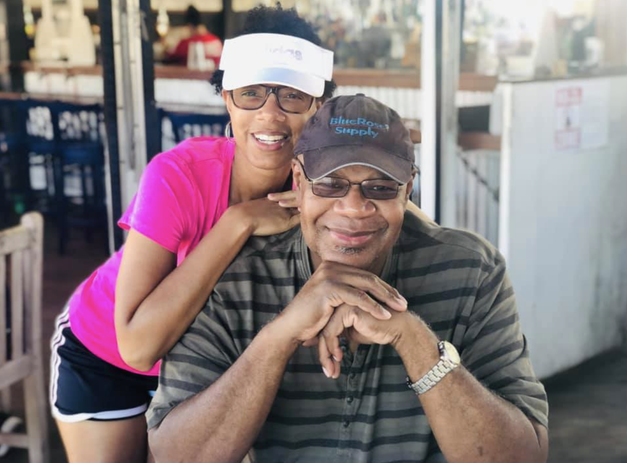 As meteorologist at WCPO here in Cincinnati, Sherry Hughes is used to being in the spotlight. Most of you know her as a bit of a local celebrity around town, and for good reason. Sherry is out front, chock full of positive energy and ready to lead. “I’ve always been conscientious from childhood that I am part of a larger community. I love being part of the greater good,” she says. Indeed! She does that wherever she goes.

Sherry initially made the move to Cincinnati for love. In 2011, after a year and a half of commuting from her home in Tampa Bay, she packed her things and moved to the Queen City to be with her beloved husband, Myron – and she’s loved this town ever since.
It wasn’t until the summer of 2019 that she knew just how much it loved her back.

Sherry lost her mom to breast cancer when she was in her early 20’s. “We were devastated. She was our world,” she recalls. Ever since, Sherry had always stayed on top of her health, incredibly proactive with her mammograms and tests. As an avid runner and swimmer, she felt great. She walked the halls at work, to keep in motion and connect with her colleagues. A testament to her vibrant and active lifestyle.

When the opportunity to have a breast MRI came about, she took advantage of it. It was a preventative, purely routine measure. Although after her appointment, something didn’t look right. She shrugged it off thinking it was probably nothing. Two 3-D mammograms and three biopsies later, they found what they were looking for. When she got the call, Sherry was informed that she was LIVING with Stage 2 invasive ductal carcinoma breast cancer.
She was stunned.

“It was a stormy day,” she recalls “so I went to work.” Sherry showed up, made sure viewers had what they needed and then headed home to face her personal storm.

She looked at her strong and steadfast husband of 9 years, weeping, and, “something came over me,” she says.

“It was as if my mother, grandmother, aunts and all my ancestors were there assuring me that it was going to be okay. I could feel their power willing this strength in me saying, ‘Do not be afraid.
You can do it. We are all here with you.’ ”

She tested HR2 positive and her oncologist recommended aggressive chemotherapy. So, she got busy getting healthy.

She remembers vividly the clumps of long hair that her mom lost during her breast cancer battle. Sherry didn’t want the drama of that, so she cropped her hair into a pixie. Her hairdresser made a custom wig for her knowing that it wouldn’t be long before she lost all of her hair. Although viewers and her co-workers knew about cancer, she didn’t skip a beat at work.

“It didn’t bother me to be bald,” she said, but wearing a wig was “hot, uncomfortable and I didn’t like it.” Seeing her aggravation, Myron encouraged her to go without it.

With very little fanfare, Sherry showed up for work, fully made up, looking fine, no wig and no hair! She went on the air and that’s when it happened…

The love she had so freely given to the community that she helped build over the years seemed to come flooding back to her. The switchboards lit up, emails came flooding in, it was overwhelming.

That’s just what Sherry Hughes is: the light after the storm. She says, “Television is what I do, but it isn’t all that I am.” It’s her abiding faith that’s kept her strong as she’s journeyed through cancer in the limelight. It’s the thing that draws her friends and community members to her as well.

Her “tv bestie” Krystin Hartman and close girlfriend Gina Goings both nominated her for a vacation through KWF. The day KWF showed up at Channel 9, she was shocked. “I didn’t know what it was all about. Why would someone do this for me and Myron!?”

The plan was for KWF to send them on a trip for their 10th Anniversary in the spring of 2020. Instead, her calendar filled up with more surgeries, treatment and, of course, Covid halted any travel plans.

It took almost two years to get that trip on their calendar. Myron and Sherry finally got off the ground last summer. When the plane took off, “a load just lifted from my shoulders. I didn’t know how much I needed that. All the strength it took to stay positive, battle cancer and be there for so many was lifted. It was freeing and liberating to run down the beach and just shout Hallelujah! God, thank you! Look where I am!” she reflects.

They didn’t talk about cancer on that trip and aside from now being a leader and role model for so many other women, they don’t talk much about it anymore at all. Sherry is glad to be LIVING.

“All that we’ve been through in the last few years is culminating in this huge ball of gratitude and joy...Somebody did that for me and Myron. Somebody else was taking care of us.”
Happy 11th Anniversary, Sherry and Myron. We are glad that like so many of our recipients, you’ve chosen to say YES. YES to Myron, YES to our city...and of course, YES to LIVING ON through KWF. You truly embody the mission of this foundation and we can’t wait to see all those who you continue to inspire along the way.

*Sherry Hughes is one of our Honorary Chairs for the 15th Annual Karen’s Gift Event on April 2, 2022. She’s one of the many deserving woman who represent our mission.* 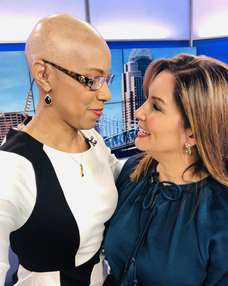 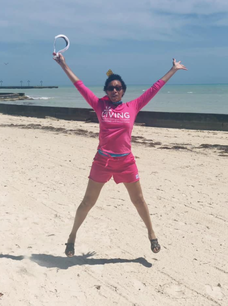